To create strong tubular joints when brazing, it is very important that the joint have enough surface area inside the joint, i.e., between the faying surfaces, so that the molten brazing filler metal (BFM) can flow into and through the joint by capillary action.

Figure 1 shows a typical tubular joint, in which the inside, faying surfaces are parallel (gap-clearance is exaggerated for illustration purposes) and the two tubes have an overlap distance that meets the normal brazing requirement of 3T-6T overlap, where “T” is the wall thickness of the tube with the thinner wall thickness. However, when the joint design isn’t a straight tubular joint, but is, instead, a T-joint where the two tubes are perpendicular to each other, such as shown in Fig. 2, then how are those two tubes to be brazed together effectively?

As described In previous articles I’ve written about the thermal expansion of metals, it’s important to note the obvious fact that all metals will expand (grow) when heated up, and then contract (shrink) when they are cooled. It was also noted that, unfortunately, each different type of metal expands/contracts at a different rate from all of the other types of metal, which is something that can lead to significant brazing problems when someone is trying to braze two different types of metal together (such as tungsten-carbide to stainless steel), because at the high temperatures of brazing (which may often exceed 2000°F/1100°C) the different expansion rates between those metals may cause the joint to literally close up completely, or perhaps to become too large to braze effectively. It is very important for designers of brazed components to understand, and take into account in their designs, the different expansion rates between any two metals being joined (also known as “differential metal expansion” rates, or “DME” rates) so that gap-clearances at brazing temperature will be correct, and thus allow good, effective brazing to be accomplished.

Fig.1 shows some thermal expansion data for a number of common metals, and does so from room-temperature all the way up to brazing temp, i.e., to temperatures in excess of 2000°F (1100°C). This is very important since you can see that the curves shown in the charts in Fig. 1 are NOT truly linear (i.e., straight lines) from room temperature up to whatever brazing temperature may be used, but do indeed have a curvature to them, and some even have significant breaks in them. Such information is VERY important when designing assemblies/components that will be joined by brazing.

Since brazing plays an important part in your company’s products, plan to have your staff attend one of the high-powered, three-day seminars being held in 2020. Our Brazing Seminars cover all the essentials for successful brazing of commercial and aerospace components. The improvements to brazing operations that have resulted from these seminars have paid for the cost of the seminar many times over at many companies! Register your staff today! They WILL truly benefit from having attended this program!

We switch directions this month to take a look at a unique problem that can be created by torch-brazers without their even being aware of it. It’s a problem I’ve observed in a number of brazing shops (including vacuum brazing shops) over the years, another example of which just came up again this past month. Torch brazing, a process I’ve taught to many hundreds of people over the last 50-years, and a process I know and understand very well can unfortunately be easily misunderstood and misused, especially by those who have a strong welding-background. Torch-welding and torch-brazing are very, VERY different! Proper torch-brazing involves three important steps: (1) broadly heating the entire joint with one or more rose-bud (multi-flame) torch tips, held far enough away from the assembly so that strongly localized heating will NOT occur; (2) the brazing filler metal (BFM) wire/rod is NEVER fed directly through the torch-flame; and (3) the torch heat is kept away from the top edge of the joint as much as possible, so that broad wrap-around heat from the torch can keep the entire length of the joint hot, and thus can draw the molten BFM down into, and through, the joint, resulting in only a tiny fillet at the top edge of the joint.

Today’s brazing technology is based on a strong foundation of the brazing experiences of many people around the world over a period of many decades (even centuries). I’ve now been very active in the brazing world for almost 50-years, and, like my predecessors in the world of brazing, I’ve learned a lot about this fascinating joining process (and I’m still learning). In this article, I’d like to share with you one of my brazing experiences from many years back, one that involved high-temperature differential-expansion between an 18” (45 cm) diameter tool steel die and a thin carbide plate (round disc) that needed to be brazed to the die’s front surface for wear-protection.

When trying to braze together materials that have widely different Coefficients Of Thermal Expansions (COE’s), the material with the higher expansion rate (COE) will grow faster than the other when heated and shrink (contract) faster when cooled down from the brazing temperature. Once the two different materials have been brazed together and cooling begins, the shrinkage-rate differences between those two materials can produce significant shear stresses at the brazed interface between them. These stresses can, in some cases, be so strong that the thin brazed joint may be torn apart at either interface, or it might cause fracturing of either base metal, or perhaps open up a large crack through the BFM layer itself. It was this extreme — and very real — differential expansion problem that we had to address in today’s “history lesson”. 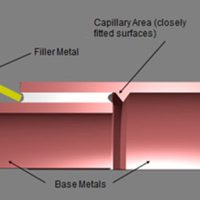 There is an important guideline about brazing filler metals (BFMs) that needs to be followed when performing any kind of brazing — namely, it is very important to feed brazing filler metal (BFM) into only one side of the joint to be brazed, allow that molten BFM to be pulled completely through the joint by capillary action until the BFM is visible at the other side of the joint, and can be seen to produce a complete braze-fillet (meniscus) around (or along) that opposite end of the joint.

As shown in Fig. 1, a BFM wire is being hand-fed into one end of a joint being brazed (gap is shown much thicker than desired only for illustration purposes), and the BFM flows all the way to the other side of that joint where it can be inspected for complete pull-through. This is an example of proper brazing in which “you feed from one side, and inspect on the other”.

It is never wise to feed BFM from both sides of the joint, since by so doing you can trap air, moisture bubbles, outgassing materials, etc., inside the joint between the two incoming walls of molten BFM, thus greatly increasing the void content in that joint. Fig. 2 shows an example of a cross-section photo of a round electrical contact that was brazed onto a flat surface, where the BFM was applied completely around the disc-shaped part that was to be brazed to the substrate below it. When the BFM melted and tried to flow into the joint, it could not do so since the air and other contaminants inside the joint could escape to the outside since the “wall of liquid BFM” was blocking it. Thus, only a fillet formed around the outside of the joint but did not flow into the joint, as shown in that photo in Fig. 2.

Shell & tube heat exchangers (S&THE) have been used for many years in a wide range of industries, including aerospace, oil refineries, chemical processing, beverage industries, and pharmaceutical industries, to name a few.

Brazing has become more and more the desired joining-method to “seal” these heat exchangers from any internal or external leaks. In this article I will look at some of the internal characteristics of S&THE’s, options for sealing them to make them leak-tight, and then at the end of the article, I will discuss some important requirements for proper joint design so that brazing can be used to cost-effectively make many tube-to-header leak-tight joints in S&THE’s at the same time! A typical shell & tube heat exchanger is pictured in Fig. 1, and a cross-sectional view of one is shown in Fig. 2, where it can be seen that an outer shell surrounds a bundle of tubes within that shell.